Not sure what to read next? Here’s what the TPL staff have been reading recently!

Darker Than Any Shadow by Tina Whittle: The dog days of summer have arrived, and Tai Randolph is feeling the heat. Running her uncle’s gun shop is more demanding than she ever imagined. Her best friend Rico is competing for a national slam poetry title. And Atlanta is overrun with hundreds of fame-hungry performance poets clogging all the good bars. She’s also got her brand-new relationship with corporate security agent Trey Seaver to deal with and while Tai finds him irresistibly fascinating, dating a human lie detector who can kill with his bare hands is a somewhat precarious endeavor. And then just when she thinks she might get a handle on things, one of Rico’s fellow poets is murdered . . . and Rico becomes the prime suspect.

Will Tai’s relationship with Trey survive another foray into amateur sleuthing? And even more importantly, will she?

The Way of Shadows by Brent Weeks: For Durzo Blint, assassination is an art-and he is the city’s most accomplished artist. For Azoth, survival is precarious. Something you never take for granted. As a guild rat, he’s grown up in the slums, and learned to judge people quickly – and to take risks. Risks like apprenticing himself to Durzo Blint. But to be accepted, Azoth must turn his back on his old life and embrace a new identity and name. As Kylar Stern, he must learn to navigate the assassins’ world of dangerous politics and strange magics – and cultivate a flair for death.

The Kings and Queens of Roam by Daniel Wallace: From the celebrated author of Big Fish, an imaginative, moving novel about two sisters and the dark legacy and magical town that entwine them. Helen and Rachel McCallister, who live in a town called Roam, are as different as sisters can be: Helen older, bitter, and conniving; Rachel beautiful, naïve – and blind. When their parents die an untimely death, Rachel has to rely on Helen for everything, but Helen embraces her role in all the wrong ways, convincing Rachel that the world is a dark and dangerous place she couldn’t possibly survive on her own … or so Helen believes, until Rachel makes a surprising choice that turns both their worlds upside down.

Stoker’s Manuscript by Royce Prouty: When rare-manuscript expert Joseph Barkeley is hired to authenticate and purchase the original draft and notes for Bram Stoker’s Dracula, little does he know that the reclusive buyer is a member of the oldest family in Transylvania. After delivering the manuscript to the legendary Bran Castle in Romania, Barkeley—a Romanian orphan himself—realizes to his horror that he’s become a prisoner to the son of Vlad Dracul. To earn his freedom, Barkeley must decipher cryptic messages hidden in the text of the original Dracula that reveal the burial sites of certain Dracul family members. Barkeley’s only hope is to ensure that he does not exhaust his usefulness to his captor until he’s able to escape. Soon he discovers secrets about his own lineage that suggest his selection for the task was more than coincidence. In this knowledge may lie Barkeley’s salvation—or his doom. For now he must choose between a coward’s flight and a mortal conflict against an ancient foe. 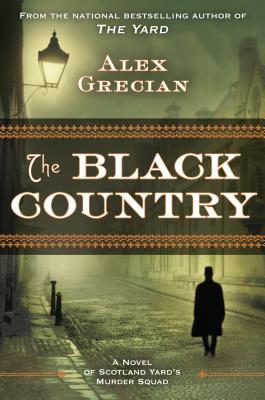 Scotland Yard’s Murder Squad returns, in the stunning new historical thriller from the author of the acclaimed national bestseller The Yard. The British Midlands. It’s called the “Black Country” for a reason. Bad things happen there. When members of a prominent family disappear from a coal-mining village—and a human eyeball is discovered in a bird’s nest—the local constable sends for help from Scotland Yard’s new Murder Squad. Fresh off the grisly 1889 murders of The Yard, Inspector Walter Day and Sergeant Nevil Hammersmith respond, but they have no idea what they’re about to get into. Not even the arrival of forensics pioneer Dr. Bernard Kingsley seems to help. In fact, the more the three of them investigate, the more they realize they may never be allowed to leave…

The Ocean at the End of the Lane by Neil Gaiman: Sussex, England. A middle-aged man returns to his childhood home to attend a funeral. Although the house he lived in is long gone, he is drawn to the farm at the end of the road, where, when he was seven, he encountered a most remarkable girl, Lettie Hempstock, and her mother and grandmother. He hasn’t thought of Lettie in decades, and yet as he sits by the pond (a pond that she’d claimed was an ocean) behind the ramshackle old farmhouse, the unremembered past comes flooding back. And it is a past too strange, too frightening, too dangerous to have happened to anyone, let alone a small boy. Forty years earlier, a man committed suicide in a stolen car at this farm at the end of the road. Like a fuse on a firework, his death lit a touchpaper and resonated in unimaginable ways. The darkness was unleashed, something scary and thoroughly incomprehensible to a little boy. And Lettie—magical, comforting, wise beyond her years—promised to protect him, no matter what. A groundbreaking work from a master, The Ocean at the End of the Lane is told with a rare understanding of all that makes us human, and shows the power of stories to reveal and shelter us from the darkness inside and out. It is a stirring, terrifying, and elegiac fable as delicate as a butterfly’s wing and as menacing as a knife in the dark.

Weird Detective: Recent Investigations edited by Paula Guran: Paranormal investigators. Occult detectives. Ghost hunters. Monster fighters. Humans who unravel uncanny crimes and solve psychic puzzles; sleuths with supernatural powers of their own who provide services far beyond those normal gumshoes, shamuses, and Sherlocks can. When vampires, werewolves, and things that go “bump” in the night are part of your world, criminals can be as inhuman as the crimes they commit, and magic can seep into the mundane – those who solve the mysteries, bring justice, or even save the world itself, might utter spells, wield wands as well as firearms, or simply use their powers of deduction. Some of the best tales of the last decade from top authors of the 21st century’s most popular genres take you down mean streets and into strange crime scenes in this fantastic compilation.